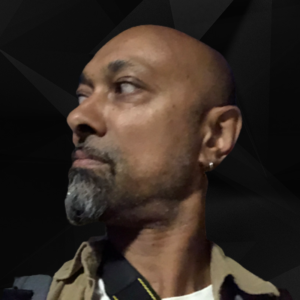 Born in 1965 in Central London, and growing up in South London, through a great musical era; through soul, disco, r & b, jazz, classical, latin and hip hop and also playing a saxophone for around 9 years. In the 1992, I met a great friend Trevor Rockcliffe, who was a great inspiration to me and showed me the way to some great Techno and House music. He also introduced me to Daz Saund, Colin Dale, Colin Favor, Dave Angel, Carl Cox, Billy Nasty, The Advent, Mr C, Mike Dearborn, Jeff Mills and Josh Wink just to name a few who were all great inspirations to me as well and all still are now to this day.

After doing a couple of djing slots for Tokyo Sex Whale at Club UK in Wandsworth, I had been going over to Miami Beach on a regular basis during the Winter Music Conferences between 1993 and 1999. I was playing regularly at Bash nightclub, Groovejet , Velvet and The Spot, with a lot of after parties on Ocean Drive, which were great experiences. Whilst in the States I made some regular visits to Chicago for Charles Little and Honolulu for Greg Denhart Double-0-Spot and played some great parties, and New York as well.

In 1998, I moved to Palma De Mallorca, where I had a weekly slot at Club Vinylo on Paseo Maritimo and club resident at Hash Café. I also took a monthly residency at a great afterhours party for 2 years in the centre of Palma.

I waa playing on the old FLEX FM previously for 1 year, where I have been continuously, still playing vinyl. I absolutely love bringing back some great memories of how music was played back in the day.

I am so happy to the Flex Management to be asked to return to the all-new re-vamped Flex 101.4 FM.

Happy listening, turn it up.