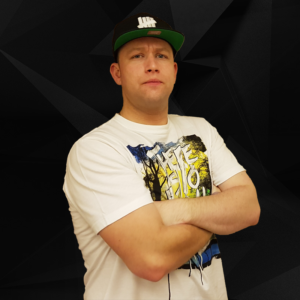 Favourite Tune: Could not say, to many favourites

Known from Fresh Fm (back in the Dayz!) SubJam FM Drive time shows in later years, the ‘Sunday Service’ on Pulse London & then Fresh Soundz Radio, Impact has an established radio history.
With a solid passion for the UK Garage sound throughout his DJ career from the vinyl to the digital age. Appearing at many club events along the way (Garage Nation, Simply Garage, Pure Temptation etc)

Impact has never lost that shopping bug for new music. Always conducting his shows with a formula of fresh and forthcoming tracks, coupled with forthcoming and exclusives, alongside a few classics for good measure. He does so in his own unique presentation style, shinning a light on quality music from new up and coming producers, playing and supporting their music when not many other DJs would do so. The long running & award winning “Sunday Service” was one of, if not the “go to” place for UK Garage for a time.

Being all about garage music since the late 90’s Impact started his own productions in late 2010 seeing his first two releases in 2011, most notably “The Cole Train” which received massive support from the likes of EZ and all accross the garage scene and beyond. It still remains a much loved underground anthem to date.
Continuing into 2015, Impact along with MCs Marvel & Biffa D (MiB) created the highly anticipated “Break it Down” which received massive support accross the scene and sparked a whole heap of remixes from respected artists.
On this merit, Impact used the strength of the track and the hype around it to launch the label Highly Swung Records, which quickly became a popular and reputable platform for Garage arists to release their material and still do so to date.

Into 2016 Impact was offered a show on the legendary FLEX FM where he qucikly established a following and cemented his position as part of the team on the network with his weekly Garage showcase.