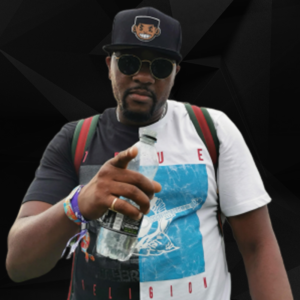 DJ Mad Fingers – One of the most iconic Deejays to come out of South London
Owner of King SSP Sound – A Notting Hill Carnival Favourite for over a decade.

DJ Mad Fingers is one of London’s finest multi faceted Deejays with a career that started 21 years ago, His passion for music saw him saving up his school lunch money to buy his first selection of records after school. Influenced and supported by his Mother to follow his passion and develop his skills on his mothers record player breaking a numerous amount of needles he was soon Djing at all the local house parties across South London. With a few years and of course reaching legal age he began playing at some of London’s most biggest clubs and raves, Ministry of Sound, Club Colosseum and Brixton Mass. Going to to become resident DJ at numerous clubs over the years.

He has Deejayed for most music artists to come out of London also providing his Sound King SSP Sound for the video shoots of Giggs & Doneo, Kyla, Stylo G and Versatile are just a few. He has also worked with a great selection of international artists including Sean Paul, Protoje, Fedde Le Grand, Alkaline and many more.

He’s kept his own raves around london from his birthday every year at clubs like Revolution, Agenda bar, The Wall, Rembrandt to holding events called House Fever, Pure House, The Good Bad & The Sexy at Clubs like Slug & Lettuce, 2AD, Babalou, Industry, Runway to name a few.

His passionate love for quality music and his unique ability to influence the vibe of any event has been a driving force, coupled with his skills, talent and versatility has seen him flourish in a huge variety of events from festivals like Glastonbury to European dance competitions, Body Power Expos to nationwide sound clashes, Kevin Heart’s after party to music videos. He has played all over Europe at festivals, concerts and weekenders. Whether it’s been a live DJ set he’s played at or hosted or an event that has hired his Sound it’s likely that many of Londoner’s would of at some point found themselves at a DJ Mad Fingers event.
King SSP Sound has been an anticipated high favoured favourite at Notting Hill Carnival for over 15 years, providing a fantastic line up of artists including a performance by the world famous Dancing Policeman.