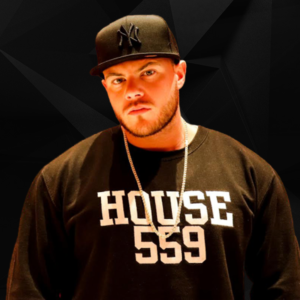 26 year old London based DJ and Producer Maximus Stephanos emerged on to the UK house scene back in December 2015. However, music is not a recent passion for Max with some early home video footage (shown on his Instagram) being taken in 2004 when he received a set of vinyl turntables for his 11th birthday.

“Some of my earliest memories of actually seeing a DJ play live came from seeing my cousin spin Grime instrumentals. I remember being on the top floor of my aunties house and I would just watch my cousin and his mates passing the mic around dropping bars.”

“I wouldn’t say I learnt to DJ on vinyl when I was a kid, especially not around the ages of 15 or 16 as I used to go for months at a time without even touching a deck. However, there’s definitely some element of familiarity with the whole DJ and mixing process that I feel I picked up in my teens”

In 2017, Maximus opened the doors of House 559 Music. An online radio station, recording studio and record label broadcasting live from North London. Whilst running the business, he also released music with ToneArtistry records as well as on his own imprint of House 559. Off the back of these releases and the developing name of the station he secured his first international bookings playing at Spring Break Portugal in April as well as Hideout Festival, Croatia in June. As the summer drew to a close Maximus appeared at London’s iconic Egg twice throughout September. Gracing the main room for a closing set as well as opening up the terrace floor on another occasion.
In 2018 Maximus broadened his skill set from mixing and production to interviews and presenting. With the launch of a new Youtube channel, House 559 TV rapidly became a go to platform for news and event highlights with features from artists such as Amine Edge & Dance, Mark Jenkyns, Chicks Luv Us, Russ Yallop, SYAP, Martin Ikin, Clyde P, Sammy Porter, Tim Baresko and George Smeddles to name a few.
As the profile of the station gained in popularity, Maximus soon found himself playing for some of London’s biggest underground events such as; House Of Silk, Audiowhore, Rewired, Back 2 Back Sessions & Analog. After securing such solid sets around his hometown, Maximus was invited back to Hideout, Croatia in 2019 where he appeared on the Euphoria stage on Day 1 of the festival.
“I’m really excited to launch my show with Flex FM in 2020 as well as focusing on my own productions and creating a brand new event for the London ravers so keep your eyes peeled! Keep up to date with all my antics on my instagram @Maximusstephanos “