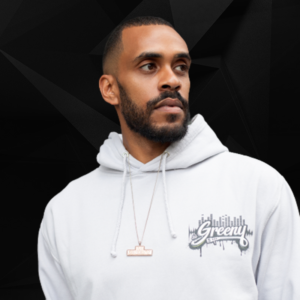 From defying odds, starting a career as a dance teacher and competitor across America and Europe to becoming a fast-rising disk-jockeying sensation in the music and entertainment industry, DJ Greeny has won hearts of fans and music lovers across the world with his breathtaking mixes of sounds that continually delights listeners worldwide.
Born, Kyle Green in the 80s, DJ Greeny was raised in the 90s and boasts an incredible versatility in music. His collections range from Soul to RnB, Dance, Hip Hop, Motown, Reggae and an entire arsenal of music genresto blow audiences away every single time and in every given event.
DJ Greeny’s love for music was birthed from childhood, and he started his career as an autodidactic disk jockey in 2014. He got his first booking at a New Year’s Eve party in 2014 and went on to secure residencies in Guilford and London from 2015-2017. At this point, he knew he was on the right career track, dedicating himself further into his craft and building his brand with mind blowing performances at private and corporate parties including birthdays, weddings, business parties and other exclusive events.
In 2018, Greeny got a break into media where he showcased his unique talent on live radio, and his mixes streamed globally. Winning over a large fanbase, Greeny soon progressed from hosting a late night/early morning show to hosting TWO primetime shows on live radio. He also got his first European gig in Greece (Kavos), undertaking various residencies during the summer of 2018.
Following the summer success and radio achievement Greeny took sets in several nightclubs across the UK ranging from London to Birmingham. 2019 saw Greeny continue from where he left off; filling up dance floors in Europe and the UK while juggling his abroad residencies (Zante) and primetime radio shows on Pulse88Radio.
Greeny is an adept performer and all-round entertainer whose forte is getting the party started, pleasing his audience with beautiful sounds and creating a breathtaking party atmosphere. Greeny consistently delivers feel-good experiences to clients, fans and his staff.
Catch DJ Greeny Saturdays 12:00-14:00