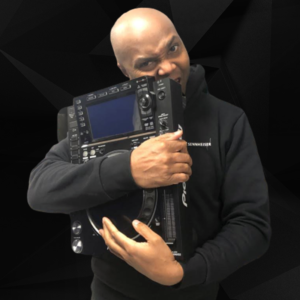 I got into music at a young age via my family and upbringing, just like most living humans. I had the Michael Jackson Thriller Album on cassette which I played to death. The first record I bought was a 5 Star album. I started to involve myself deeper in the later years of high school, recording radio shows on cassettes and buying vinyls whenever I could from wherever I can; R&B Soul Hip Hop Ragga was my passion. I also built a sound system which I’d rent out for house party’s, which I also had the pleasure of DJing at.

From there, I moved up into playing clubs and bars and have played at most of London’s venues at some point over time. I joined the FLEX FM team playing R&B on a late Tuesday night, which was great, then a Monday night at an earlier time became available. However, management had an idea of what style music they wanted to fill the slot with, which lead me to steer in the direction of House music. I love it with a passion, together we have all been striving for excellence.

I’m currently in the sound engineering business, which is a great help for myself and the team, pushing to get the best results.

DSHSSK is my movement. We try to look for up and coming fresh, new house music. In addition, a touch of Afro beats, which has the ability to be timeless and also the old classics, which have that magic that keep people wanting to hear them. As long as it’s good music, I will play it. I will continue my quest for everybody to hear it.

I look forward to you guys joining myself, along with the entire FLEX FM family, in these exciting times in our quest to greatness.